Neurofeedback, also called EEG biofeedback or neurotherapy, is a type of therapeutic treatment for your brain. It is a way to directly train the brain to self regulate and to perform more efficiently.  Neurofeedback is a research-supported treatment to sharpen attention, relieve anxiety, enhance mood, and improve learning, and behavior…without medication. During neurofeedback, you learn to train your brain to correct the faulty brain wave activity, resulting in improved day-to-day functioning. You can think of neurofeedback as “brain training.” Like a muscle, your brain gets stronger the more you train it. And when the brain works better, you feel better and perform better. CLICK HERE for an introductory video.

How Does Neurofeedback Work?

The brain has approximately one trillion cells in different states of activity.  This brain activity occurs in four distinct brain wave patterns, from very fast to very slow.  Recent research shows that individuals with conditions such as ADHD, sleep difficulties, and other conditions have brain wave activity that is too slow in some cases, and too fast in others.  For example, people with ADHD have less activity in areas of the brain that control attention, focus, and the regulation of thinking and feeling.

Research also shows that we can train our brain to correct faulty brain wave activity.  Neurofeedback uses a learning process that strengthens your brain.  it “exercises” the areas of the brain that control attention, emotion, and behavior, therefore strengthening those areas.  It increases your awareness of your brain’s natural rhythm, which enables you to learn how to control its rhythm in a way which improves your day-to-day functioning and well-being.  It’s much like the resetting of a clock, tuning a piano, or getting a tune-up for a car’s engine so that it runs more smoothly. 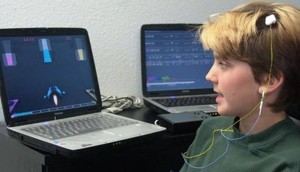 What Happens During A Neurofeedback Session?

Neurofeedback training is a safe, painless, non-invasive procedure. Electrodes are attached to the scalp to listen in on brainwave activity. The brainwaves are monitored by means of an amplifier and a computer-based instrument that processes the signal and provides the proper feedback. This is displayed to the trainee by means of a video game or other video display. The trainee is asked to make the video game go with his brain. As activity in a desirable frequency band increases, the video game moves faster, or some other reward is given. As activity in an adverse band increases, the video game is inhibited. Gradually, the brain responds to the cues that it is being given, and a “learning” of new brain wave patterns takes place. The new pattern is one, which is closer to what is normally observed in individuals without such disabilities.

How Long Does Training Normally Take?

EEG training is a learning process, and therefore, results are seen gradually over time. For most conditions, initial progress can be seen within about ten sessions. Initial training goals may be met by twenty sessions, at which time we re-assess and make further goals as needed. In the case of hyperactivity and attention deficit disorder, training is expected to take about forty sessions, or even more in severe cases. The end result is often transformational, described as a “new lease on life.” Neurofeedback is a tool for both discovering and recovering one’s true self with the ability to function at a higher level and engage more fully in life.

What Kinds of Problems and Conditions Does Neurofeedback Address?

The conditions which have documented, published evidence of their effectiveness are: